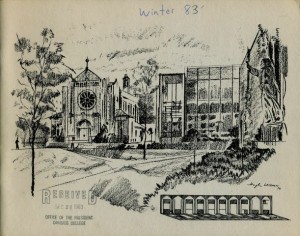 Quadrangle was founded by a collection of earlier campus writings called The Canisius Monthly which began in 1914. This collection produced about nine issues a year until it turned into a quarterly publication, which was known as the Canisius Quarterly.

Quadrangle was published under moderator Roger B. Dooley, a former graduate and English professor. It was given the name Quadrangle because of the representation of the buildings that formed a quadrangle on the main campus.

Quadrangle has a rich, long-standing history and is celebrated for its high standards and quality. The staff goes through a thoughtful selection process with open discussion when reviewing submissions for each issue. Once pieces are chosen, current editor(s)-in-chief work with a local printer called Dual Print & Mail in Cheektowaga, New York and carefully make choices to create a professional magazine.

Quadrangle fosters a nurturing community filled with tradition and creativity. The Canisius community awaits in anticipation each spring for the unveiling of the new issue. Former editors-in-chief and staff members, alumni, and long-term supporters of the magazine gather in Grupp Fireside Lounge in the Richard E. Winter ‘42 Student Center to hear contributors read and share their published work.